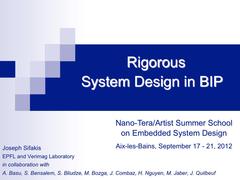 Existing system design techniques are mostly empirical and lack scientific foundations. We advocate for rigorous system design as a formalized process leading from application software and a model of its execution infrastructure, to an implementation meeting given requirements. This process needs to be sound, accountable and scalable, and supported by methods and tools. We discuss five principles characterizing rigorous system design: separation of concerns; component-based construction; semantic coherency; correctness-by-construction; and automatic generation of optimized implementations. We present a rigorous design flow based on the BIP component-based language. The flow involves a sequence of steps for deriving trustworthy and optimized implementations from an application software written in a domain specific language and a mapping into its its execution infrastructure. The first step consists in translating the application software into a BIP model. This model is subsequently refined by using source-to-source transformations which are correct-by-construction. The transformations are parameterized by mappings associating components to processors, data to memories and interactions to execution paths or protocols. The obtained refined model represents the behavior of the application software running on the execution infrastructure. It is used for performance analysis as well as to generate automatically correct implementations. We present applications of the rigorous design flow to selected real-life case studies from various areas, including embedded systems, multimedia systems and robotics.