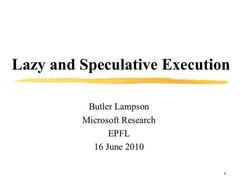 The distinction between lazy and eager (or strict) evaluation has been studied in programming languages since Algol 60s call by name, as a way to avoid unnecessary work and to deal gracefully with infinite structures such as streams. It is deeply integrated in some languages, notably Haskell, and can be simulated in many languages by wrapping a lazy expression in a lambda.

Less well studied is the role of laziness, and its opposite, speculation, in computer systems, both hardware and software. A wide range of techniques can be understood as applications of these two ideas.

Laziness is the idea behind:

Speculation is the idea behind:

In both cases it is usual to insist that the laziness or speculation is strictly a matter of scheduling that doesn't affect the result of a computation but only improves the performance. Sometimes, however, the spec is weakened, for example in eventual consistency. I will discuss many of these examples in detail and examine what they have in common, how they differ, and what factors govern the effectiveness of laziness and speculation in computer systems.