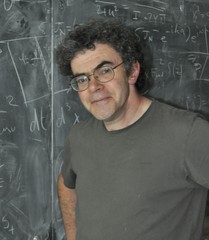 Since the discovery that electrons in graphene behave as massless Dirac fermions, the single-atom-thick material has become a fertile playground for testing exotic predictions of quantum electrodynamics, such as Klein tunneling and the fractional quantum Hall effect. Now add to that list atomic collapse, the spontaneous formation of electrons and positrons in the electrostatic field of a super-heavy atomic nucleus. The atomic collapse was predicted to manifest itself in quasi-stationary states which have complex-valued energies and which decay rapidly. However, the atoms created artificially in laboratory have nuclear charge only up to Z = 118, which falls short of the predicted threshold for collapse. Interest in this problem has been revived with the advent of graphene, where because of a large fine structure constant the collapse is expected for Z of order unity. In this talk we will discuss the symmetry aspects of atomic collapse, in particular the anomalous breaking of scale invariance. We will also describe recent experiments that use scanning tunneling microscopy (STM) to probe atomic collapse near STM-controlled artificial compound nuclei.