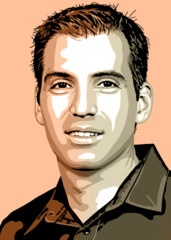 From the Internet to embryos and brains:
The hourglass architecture of hierarchically modular systems

Many systems in nature and technology have an hourglass-like architecture, meaning that the system generates hierarchically many outputs from many inputs through a relatively small number of intermediate complexity modules. The latter, referred to as the waist of the hourglass, participate in almost all input-output dependencies and they are critical for the operation of the entire system. We have investigated the hourglass effect in technological systems (Internet protocol stack, call-graphs and class dependency networks in software, deep neural networks), information systems (citation networks), and in nature (genomic hourglass in developmental biology, metabolic networks, c.elegans brain). The talk will summarize these findings, aiming to answer the following questions: why is the hourglass effect so common across disciplines and what does it imply about the evolvability of the corresponding systems?