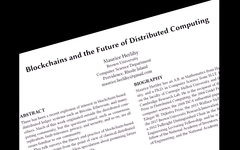 Blockchains and the Future of Distributed Computing

There has been a recent explosion of interest in blockchain-based distributed ledger systems such as Bitcoin, Ethereum, and many others. Much of this work originated outside the distributed computing community, but the questions raised, such as consensus, replication, fault-tolerance, privacy, and security, and so on, are all issues familiar to our community. This talk surveys the theory and practice of blockchain-based distributed systems from the point of view of classical distributed computing, along with reckless speculation about promising future research directions for our community.