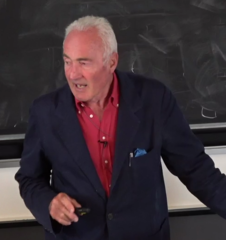 Recorded 23 May 2018 in Lausanne, Vaud, Switzerland

Several physical observables of materials have their theoretical root in geometrical properties of the electronic ground state. To start with, I will outline the modern theory of the insulating state, which addresses all kinds of insulators (band, Mott, Anderson...), discriminating them from metals by means of a very simple geometrical property of their ground state. Next I will specialize to either band insulators or band metals, focusing on some observables which stem from the geometry of the occupied manifold in reciprocal space. Nowadays the most popular geometrical observable is electrical polarization (for insulators), whose expression is a Berry phase: the k-space integrand is gauge-dependent and the bulk observable is defined only modulo a "quantum". Some other observables, instead, obtain from a gauge-invariant k-space integrand and are free from any "quantum" ambiguity: these include orbital magnetization and anomalous Hall conductivity (both defined for either metals or insulators). Other observables in this class will be discussed as well. Recent work has shown that orbital magnetization and anomalous Hall conductivity also admit a dual representation in coordinate space, and can be evaluated for a bounded sample—even noncrystalline—with square-integrable orbitals (where k-space doesn’t make any sense).