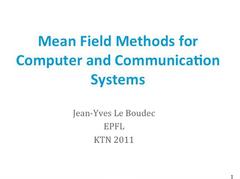 We consider a generic model of N interacting objects, where each object has a state and the evolution of the system depends only on the collection of states at any point in time. This is quite a general modeling framework, which was successfully applied to model many forms of distributed systems and communication protocols. When the number of objects N is large, one often uses simplifying assumptions called "mean field approximation", "fluid approximation", "fixed point method" or "decoupling assumption".

In this talk we explain the meaning of these concepts and show that the first two, namely mean field approximation and fluid approximation, are generally valid (but not always). However, we also show that the last two, namely fixed point method and decoupling assumption, require more care, as they may not be valid, even in simple cases. We give sufficient conditions under which they are valid. We illustrate the concepts with some easy-to-follow examples.