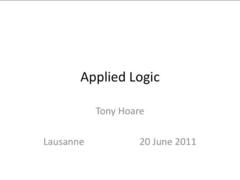 Logic is the study of the rules of valid reasoning. Its direction of development has always been inspired by its intended areas of application. When first codified by Aristotle it was applied to reasoning in philosophy which then included biology and other branches of science. In classical times it was applied by Euclid to land measurement (geometry); in medieval Europe it was applied by William of Occam and others to theology. Leibnitz hoped that logic could transform the art of mathematical proof to calculation as in the infinitesimal calculus. Logic was developed further in modern times to secure the foundations of mathematics protecting against inconsistency of its axioms and checking against errors and omissions in individual mathematical proofs.

Most recently logic has been applied in the design of the hardware of binary digital computers and in the development of the software programs which make them usable. The consequential reduction in the cost of errors in both hardware and software is estimated in billions of dollars per year.

The aim of this lecture is to show that Computer Science belongs to a great intellectual and academic tradition that stretches back into antiquity. And the future is equally exciting. Computers are now getting ever more proficient at logical and mathematical reasoning; and their capabilities are being widely exploited in the humanities in biology and in other branches of science.