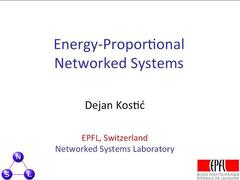 Energy consumption of the Internet is already substantial and it is likely to increase as operators deploy faster equipment to handle popular bandwidth-intensive services, such as streaming and video-on-demand. Further, the CMOS technology that is predominantly used in the ICT equipment is reaching its energy efficiency limits. The net effect of these issues is that the Internet will shortly hit the power delivery and cooling limits while the hardware is trying to sustain the exponentially increasing traffic demand.

In this talk, I will describe our efforts in designing energy-proportional networks that mitigate this problem by trying to use the minimal amount of energy to satisfy each offered load (traffic).

First, looking at the energy breakdown, I will concentrate on greening access networks. I will describe how we use traffic aggregation over wireless user gateways and switching at the ISP side to achieve substantial energy savings. The resulting powering off of gateways permits the remaining ones to synchronize at higher speeds due to reduced crosstalk - a surprising performance benefit.

Second, I will focus on backbone and datacenter networks that are starting to reach power delivery limits. Existing approaches that recompute the optimal network configuration with each substantial change in traffic demand do not scale. To overcome the optimality-scalability trade-off, I will describe REsPoNse, an approach that precomputes a few energy-critical paths and uses online traffic engineering to redirect the traffic in a way that enables large parts of the network to enter a low-power state.