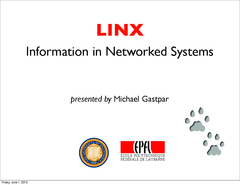 Classical experiments in neuroscience have measured the response of a single neuron to a stimulus or a class of stimuli. Over the past decades, however, large datasets have emerged owing to new measurement techniques such as implanted tungsten microwire arrays and ECG. In classical studies, the natural problem is one of system identification, namely, the response characteristics of a single neuron. With contemporary data sets, simultaneously involving multiple neurons, many more questions can be asked, pertaining not only to the response characteristics, but also to the network behavior of the neurons. Fundamental properties like redundancy in neuron populations, causality and graph structure in networks of neurons, and functional relationships between multiple neurons can be estimated from data. Methods are emerging that can deal with and exploit the advantages of large amounts of measurement data from multiple neurons. In this talk, we discuss statistical methods based on information measures such as mutual information, directed information, "information bottleneck," and Shannon-optimal communication.